The Ancient Peoples of Pinnacle Peak 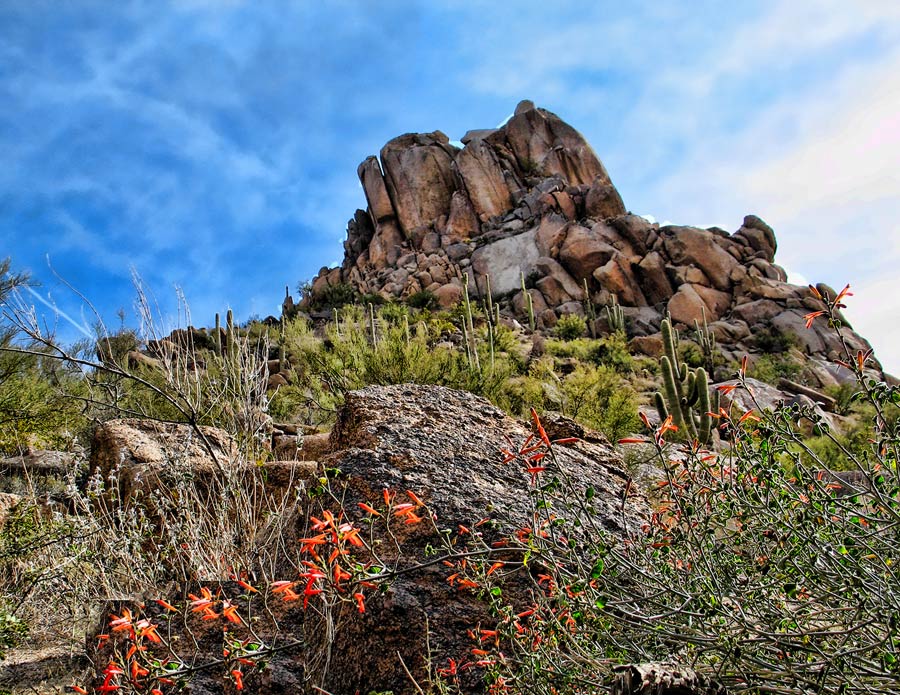 As you hike among the boulders of the Pinnacle Peak area and stroll along trails in the McDowell Mountains, you may begin to feel the past and even see evidence of the Native American cultures that have inhabited this area for thousands of years.

Archaeological evidence indicates that the Pinnacle Peak area was roamed by ancient peoples as far back as the Early Archaic Period, arguably as long as 8,000 years ago. Signs of these early settlers and seasonal visitors are sprinkled throughout the area in the form of artifacts such as stone tools, projectile points, ceramics and petroglyphs. In addition, archaeologists have excavated a large prehistoric pit-house village smack dab in the middle of the Pinnacle Peak area. Not to get your hopes up though, it has been restored to invisibility and is not accessible to the public, as it’s being protected for future archaeologists.

In addition, temporary seasonal rock shelter encampments favored by Hohokam and their predecessors have been found in many nearby environs. They favored camp-ready rocky shelters, usually near major washes, as their temporary, seasonal campsites. In this area we have also found linear rock terraces, likely used by the Hohokam to shepherd rainwater for agricultural purposes.

Hohokam translates to Native American variations of “those of who have gone” or “all used up” and may be the ancestors of today’s Tohono Odom Indians and other local tribes. For reasons that are unknown but much speculated, around 1450 A.D. or so, the Hohokam disappeared.

Some of the best existing evidence of prehistoric people is found in the many bedrock mortars, or metates, in the Pinnacle Peak area. These oval-shaped indentations are found in smooth granite rocks. They were formed by the grinding of mesquite beans, nuts and seeds to make flour. This kind of granite is so hard it’s amazing how much grinding it took to make these indentations in the rock. Makes us glad we can buy flour at the store!

All of this is just another great reason there is a McDowell Sonoran Preserve, as it’s more likely that archaeological sites, often well-preserved in this dry climate, will be protected. Neither the City of Scottsdale, nor the Preserve promotes these areas for the sad, obvious reason that across the Southwest, prehistoric sites are looted and defaced. There are estimated to be scores of sites in this area and only a few are known…mostly to intrepid hikers and archaeologists. In the Preserve you have to stay on designated trails, some of which avoid these sites. Perhaps the City and Preserve will consider opening up one or two to the public, while helping to protect them with volunteer site stewards, as has been discussed. So until then, we suggest you get out on a trail and contemplate these hardy early visitors and how they subsided.