In the Shadow of Pinnacle Peak: A Look Back at the History and Development of North Scottsdale

Home > Blog > Community > In the Shadow of Pinnacle Peak: A Look Back at the History and Development of North Scottsdale
Posted on March 13, 2019 by Laura Lucky

This excerpt from the book, Images of America: Pinnacle Peak, authored by Les Conklin and the Greater Pinnacle Peak Association, and published by Arcadia Publishing is reprinted with permission.

Pinnacle Peak is located approximately 25 miles northeast of downtown Phoenix, 20 miles north of downtown Scottsdale and 13 miles southeast of Cave Creek and Carefree. Rising out of the Sonoran Desert floor to an elevation of 3,170 feet, Pinnacle Peak’s distinctive shape is recognizable from more than 25 miles away.

Situated in the Sonoran Uplands at the north end of the McDowell Mountains and enriched by slightly cooler temperatures, springs, and short-lived water sources from rain and rapidly flowing washes, Pinnacle Peak is the centerpiece of a rugged desert landscape. Pinnacle Peak and the neighboring foothills are dotted with saguaro, palo verde, mesquite and cholla. The environment is harsh yet fertile and has provided habitats for many species of Sonoran wildlife since long before the arrival of man and has supported human habitation for thousands of years.

It is 1983. Passengers are peering through their bus windows at Pinnacle Peak, one of central Arizona’s most recognizable landmarks. The excited tourists are on their way to a famous Pinnacle Peak cowboy restaurant. The driver draws the passengers’ attention to two men dressed in cowboy garb standing by the side of the quiet, lonely road. The men are waving for help. The driver pulls over and opens the door. The “cowboys,” with six-shooters drawn and bandanas covering their faces, board the bus and shout, “This is a holdup!”

Since the long-gone days when tour companies routinely staged fake highway robberies, the popularity of Pinnacle Peak as a tourist destination has continued to grow. It has also become a coveted North Scottsdale residential area and home to 150-acre Pinnacle Peak Park, which welcomed its one-millionth visitor in February of 2008. Most visitors are unaware of the remarkable natural and human history of Pinnacle Peak and the vibrant community that surrounds it. This book will focus on its untold story.

Archeologists believe that archaic hunter-gatherers roamed the area from as early as 5,000 B.C. until A.D. 600. Upland Hohokam resided in the region until approximately A.D. 1,200. In 1988, Pinnacle Peak Village, a Hohokam settlement within two miles of Pinnacle Peak, was excavated and photographed.

In 1865, the U.S. Army established Camp McDowell (later renamed Fort McDowell) approximately 20 miles from Pinnacle Peak. The camp’s purpose was to provide protection for miners, ranchers and settlers in central Arizona from various groups of native people, including the Tonto Apache and Yavapai peoples. The Army established a supply road connecting Fort McDowell with Fort Whipple near Prescott, Arizona. The road, traces of which can still be found, passed just north of Pinnacle Peak.

Late in the 1950s, colorful entrepreneurs opened cowboy venues in the Pinnacle Peak area, forerunners of Rawhide, Arizona’s most popular attraction after the Grand Canyon. In the 1960s, after Scottsdale Road was paved, area residents installed plant identification signs along its northern reaches to protect the desert they cherished. A retired executive opened a golf course that used sand for greens. Cattle dramatically outnumbered residents.

In 1969, Jerry and Florence Nelson “struck it wet” when they drilled into a large aquifer not far from Pinnacle Peak. And the rush was on in more ways than one. As the 1960s gave way to the 1970s, 1980s, and 1990s, houses and golf courses began to replace vacant ranch land, residents continued to work to protect the natural environment, and the Pinnacle Peak area was annexed into the city of Scottsdale. Local organizations sprang up to protect the environment and encourage sensitive planning. As new master-planned communities were considered, members reviewed plans and disseminated information to property owners about development and preservation efforts. The master-planned communities approved during this period included Pinnacle Peak Plaza, Pinnacle Peak Country Club and its nine subdivisions, Troon Village, Troon North, Desert Highlands, Estancia, Legend Trails, Grayhawk, Terravita, and Winfield.

Development brought new conveniences. Paved roads replaced dirt tracks. Thanks to new water and telephone lines, residents no longer needed to haul water or drive five or more miles to make a telephone call. A new post office brought mail service to the area. A general store and then retail centers made it unnecessary to drive long distances for shopping.

The road construction and installation of water lines and other infrastructure brought by development also created new challenges for residents. Gun owners who enjoyed hunting and target practice in the open desert were angered by new regulations designed to protect residents and tourists. With no newspapers or magazines serving the area, Pinnacle Peak residents created their own publication to provide information about development projects, local activities, Sonoran plants and animals, and the ever-increasing number of stores and services.

Government leaders worked to enhance communication and understanding between “downtown” Scottsdale and the still remote northern neighborhoods. With the active participation of area residents and developers, ordinances designed to protect native plants, environmentally sensitive areas, and scenic roadsides were adopted.

In July 1995, the burgeoning community and its scenic landscape narrowly escaped disaster when a bolt of lightning struck the desert less than two miles from Pinnacle Peak. The mountain itself was spared, but the lightning strike caused the largest fire ever experienced in the Phoenix metropolitan area. The fire burned 23,000 acres east and southeast of Pinnacle Peak.

For many years, Pinnacle Peak was a secret destination for local equestrians, hikers, and rock climbers. In the 1970s, local residents began suggesting that a park should be created in the area. As growth continued to surge northward, those calls increased, and in 2001 after much public input and discussion, the City of Scottsdale opened Pinnacle Peak Park.

Most visitors to Pinnacle Peak Park enjoy the park’s well-developed hiking trail. Many of the plant species and rugged desert landforms that the Hohokam observed can be seen and enjoyed from the trail. The 1.75-mile trail has a very smooth tread that is enjoyed by both equestrians and hikers. Experienced rock-climbing enthusiasts enjoy three climbing areas and a variety of routes within the park.

Like the eager tourists described in the opening paragraph, most people first come to Pinnacle Peak as visitors. Since the days of the prehistoric hunter-gatherers, the irresistible draw of the land and its wildlife has caused many to call Pinnacle Peak home. The beauty of the area led Scottsdale and its residents to create Pinnacle Peak Park and motivates us to work diligently to preserve the natural environment and heritage of this remarkable place. 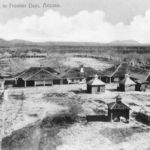 The U.S. Army established Camp McDowell (later renamed Fort McDowell) to protect settlers from combative Indians in the surrounding mountains. Located at the confluence of the Verde and Salt Rivers, the installation commanded a number of the more important trails that served the Apache of central Arizona. The fort became an embarkation point for many military expeditions against the Apache. (Courtesy of the Arizona Historical Association.) 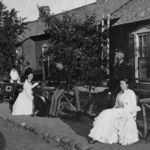 Some officers brought their wives and children to Fort McDowell. In this photograph, unidentified officers and their wives relax outside the fort’s officer quarters. Army families endured a long, arduous journey to the remote fort and were faced with primitive conditions once they arrived. (Courtesy of the Arizona Historical Association.) 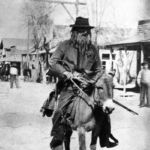 As the Apache became less menacing, prospectors followed Stoneman Road into unexplored land, including the Pinnacle Peak area and McDowell Mountains. Mines were opened in the McDowell Mountains. Kenyon Turner Palmer, who homesteaded near Pinnacle Peak beginning in 1933, found long-forgotten claim notices in Prince Albert tobacco tins – evidence of previous prospecting activity. This photography from the 1880s is of a prospector known to Cave Creek residents as “Old Rackensack.” (Courtesy of the Cave Creek Museum.) 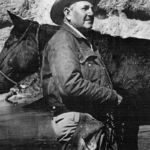 In the 1800s, American settlers began using the Pinnacle Peak area for ranching and some prospecting. In 1916, Edwin Orpheus Brown, a Scottsdale businessman, established a ranch within sight of Pinnacle Peak. The ranch, DC Ranch, grew to 44,000 acres. His son Edwin Elsworth Brown ran a heard of 4,000 cattle in the area. (Courtesy of the Scottsdale Historical Society.) 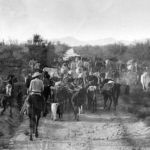 Until the 1950s, members of the Brown family and other cowboys drove DC Ranch beef cattle to market in Phoenix. Following dirt tracks across a vast open desert, it took two days to herd the cattle from Brown’s Ranch to market. The cattle drive made an overnight stop at a way station near today’s intersection of the Loop 101/Pima Freeway and Shea Boulevard. (Courtesy of the Scottsdale Historical Society.) 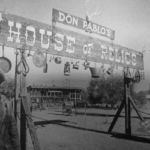 Protected by two pet timber wolves, Don Pablo lived in a one-room, dirt-floored shack. He was surrounded by hogans filled with Indian jewelry, guns, pottery, cowboy paraphernalia, teapots, and other wonders. Outside were a gas pump and collections of used bicycles and harnesses. After his death, thousands of people attended two auctions of his collections, which generated more than $100,000 in sales. (Courtesy of Days and Ways.) 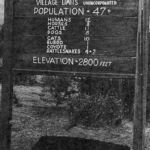 A December 1958 issue of Days and Ways highlighted the area’s remoteness with this photograph and the caption, “Little is left to the imagination as they enter Pinnacle Peak, a refreshing stop on a dusty, desert road northeast of Phoenix. The sign is a model of a complete census.” (Courtesy of Days and Ways.) 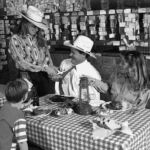 Pinnacle Peak Patio increased its fame by cutting off customers’ neckties and then hanging them from the ceiling. At first, a knife was used to separate the tie from its owner; later scissors became the tool of choice. The back of this 1970s postcard states, “WARNING TO CITY SLICKERS: Scissor-wielding waitresses will cut off any neckties worn into this steak house.” (Courtesy of Mary Dickson.)

Want to read more? Images of America: Pinnacle Peak, authored by Les Conklin and the Greater Pinnacle Peak Association, and published by Arcadia Publishing, is available for purchase at Amazon.com or ArcadiaPublishing.com

Book Giveaway!
As proud residents and enthusiasts of North Scottsdale and the Pinnacle Peak area, The Luckys would like to gift a copy of this book to you! Simply be one of the first 75 people to email us at Lucky@RussLyon.com to request a free book from us. Happy reading! (One book per household please.)