The Waste Management Phoenix Open: A Hole-in-One for Scottsdale! An aerial view of the TPC Scottsdale Stadium Course, home of The Phoenix Open since 1987.

Just after the holidays every year, there is an electrified buzz in the air all over the Valley. Office conference rooms are humming with plans for entertaining clients, golf clubhouses are the site of excited speculation, golf buddies heartily discuss the player roster, and twenty-something socialites are formulating their mingling strategies.

Dubbed “The Greatest Show on Grass,” The Waste Management Phoenix Open, hosted by the Valley’s longtime civic organization The Thunderbirds, has morphed from a small, unassuming morning of play into a week-long, first-class affair boasting one of the largest sporting event crowds in the world.

Living up to its name, the tournament is definitely one great show. Unlike any other tournament on the PGA TOUR, The Waste Management Phoenix Open attracts a staggering number of spectators, a field of worthy competitors, and media from around the globe to capture every exciting moment. As the best-attended golf tournament in the world, the tournament has gained legendary status as the most unique stop on the PGA TOUR.

“Golf is a long-storied sport, and we have one of the most iconic holes in the sport – the legendary 16th hole,” says Chance Cozby, Thunderbird member and the 2019 Tournament Chairman. “We’ve created an atmosphere that our players and fans have embraced as something unique and special. People from all over the world come to Scottsdale to experience it. Somewhat like attending the Super Bowl, catching a game at Fenway Park or experiencing a race at Talladega; our very own Open is on bucket lists around the world.”

The 2019 tournament, held January 28-February 3 at TPC Scottsdale, will mark the 84th playing of the event.

From Humble Beginnings
Founded in 1932 as the Arizona Open, the name changed to the Phoenix Open in 1935 and was actually discontinued after the 1935 tournament, partially due to the trials of the Great Depression.

It was 1937 when the Phoenix Chamber of Commerce recognized the need for a team of individuals to serve on a special events committee, as its role as a convention and tourism bureau was expanding. The Chamber chose five local executives to form the group, and The Thunderbirds was chosen as the name because the emblem of the Chamber was (and still is) a Native-American design of the mythical thunderbird.

One of the members of the newly formed Thunderbirds was golf aficionado Bob Goldwater, Sr. He began campaigning his fellow Thunderbird members to revitalize the Phoenix Open and sponsor the event. It took a lot of prodding by Goldwater at the time, as his fellow Thunderbirds weren’t as enthusiastic about the event and it was left to Goldwater to organize and run the 1939 tournament. He sold the tickets, recruited volunteers and set up the course; earning him the affectionate moniker “The Father of The Phoenix Open.”

When the tournament did return in 1939, it was played at the Phoenix Country Club (still located at Thomas Road and Seventh Street). The winner that year was a young man named Byron Nelson, who took home $700 for first place – quite a modest sum compared to the tournament’s 2018 winner Gary Woodland’s earnings of $1,242,000 from the total purse of $6,900,000.

Since 1939, the tournament has been played every year except 1943 when wartime travel restrictions were in place. The first years of the event were played at the Phoenix Country Club in Phoenix and later at Arizona Country Club, but has found its home at TPC Scottsdale since 1987. Today, the Open and The Thunderbirds are somewhat synonymous, as the civic organization has implemented the tournament since Goldwater, Sr. nearly single-handedly resurrected it in 1939.

A Lasting Legacy
Within a few steps onto the tournament grounds, spectators are likely to catch a glimpse of a proud Thunderbird. Wearing their traditional attire of a navy-blue velour tunic and large silver pendant, members of The Thunderbirds organization work tirelessly all year as hosts of the Open.

The business and civic leader volunteers that make up The Thunderbirds not only run the Open but proceeds from the event fund their Valley-based philanthropic activities that benefit not only young athletes but children’s charities and more.

Over the years, millions of dollars of Open proceeds have been donated to numerous non-profit organizations right here in Maricopa County; such as the Special Olympics, the Boys and Girls Clubs, Valley of the Sun United Way, YMCA, Phoenix Children’s Hospital and more. In fact, a staggering $130+ million has been awarded with The Thunderbirds’ proceeds from the Open.

“The Tournament is a huge win-win-win,” Cozby states. “The spectators have a great time, the players enjoy their TOUR stop in the Valley, and the proceeds from the Open allow The Thunderbirds to make an enormous impact on our local community.” 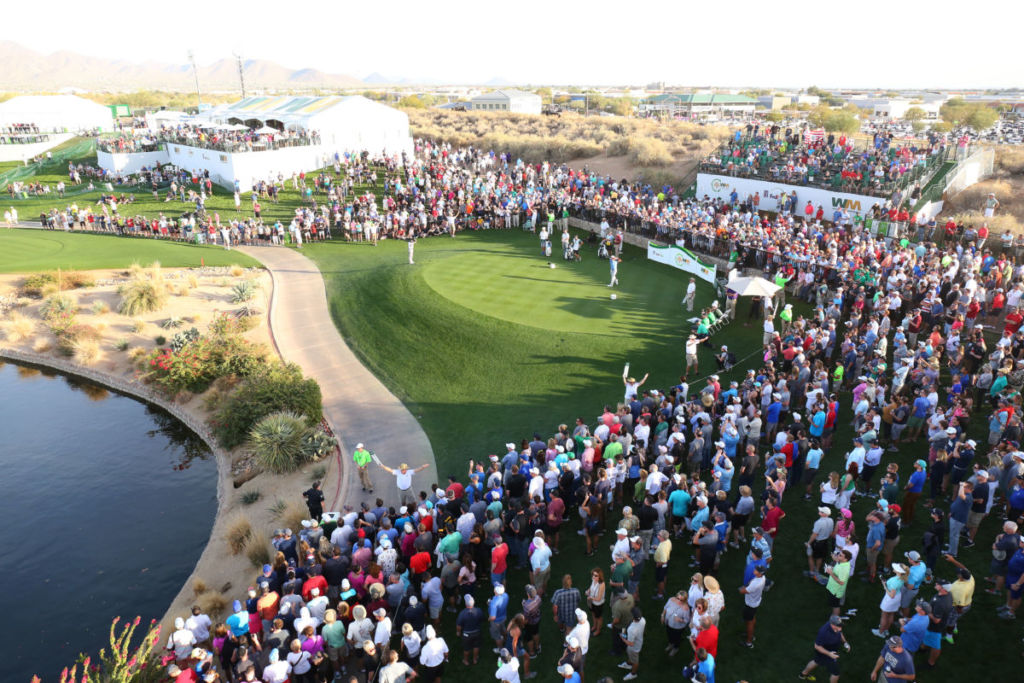 Throngs of spectators cheer on the players.

A Victory for Arizona
With over 719,000 spectators in attendance for the 2018 tournament, it goes without saying that the economic impact of this annual event is a boon for Arizona.

An economic impact study on the 2017 tournament by the Arizona State University W.P. Carey School of Business and the L. William Seidman Research Institute found that the 2017 Waste Management Phoenix Open had pumped $389.3 million into the state’s economy.

This included the expenditures of visitors who identified the Open as the key factor in visiting Arizona, media from outside Arizona who covered the event, the “organizational spending” by The Thunderbirds, media and event production companies, businesses involved in operations, plus the indirect and induced multiplier effects.

The People’s Open
The five weeks after the first of the year are a magical time to be in Scottsdale. From the Fiesta Bowl, to Barrett-Jackson to the Waste Management Phoenix Open; residents and visitors are treated to multiple iconic events year after year.

“The players find the Open to be unlike anything else on the PGA TOUR and they look forward to it. They know exactly what to expect. We hear over and over again that they always love coming back to Scottsdale. They love the crowds, they love the energy and they love the excitement,” Cozby beams.

“Yet it’s the spectators that make the tournament what it is,” he continues, “and thus the Open has become known as ‘The People’s Open.’ It’s the enthusiasm of the fans and the support of the community that continues to build this tournament into one of the top-rated sporting events in the world.” 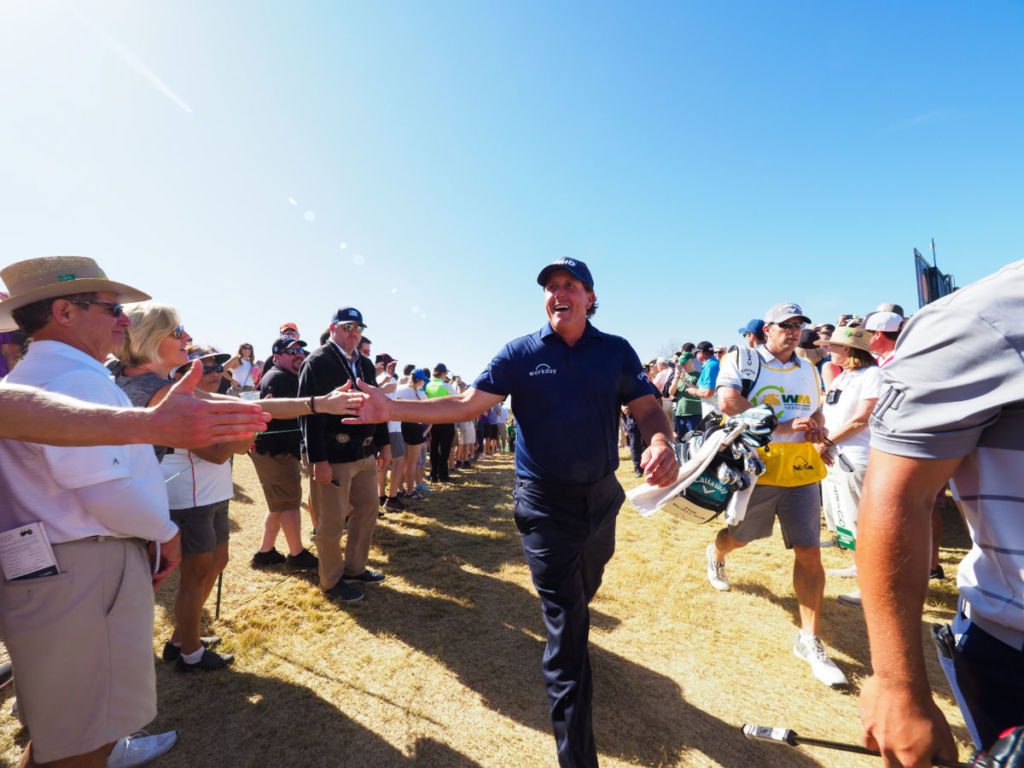